Two-stage traffic model on the base of the GSM network

Concept of new approach to traffic modelling in cities. Method of gathering data from GSM network. Procedures of  traffic spacing at the roads network and data analysis.

Alternative drive sources in trolleybuses -review of implemented solutions in the European cities.

Idea of installation of alternative drive source in trolleybuses. Review of implemented solutions and experiences of the European countries.

Traveling to work in the Poznań metropolitan area

Identification of dominant directions of daily workers migrations to Poznań. Position of the city of Poznań in the structure of twenty-four-hour migrations. Importance of particular communities of the agglomeration  in the travel structure.

Analysis of unpaid fares by passengers of the MPK S.A. in Krakow

Parameterization of transport districts in the regional traffic models

Data aggregation in the traffic models. Characteristics of the potential demand for transport in poviats of the Lubelskie Voivodship recognized as transport districts. Analysis of the distinctive points in the poviats with regard to transport services for their inhabitants. 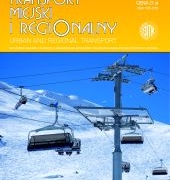