The article presents the assessment of traffic conditions at seven signalized roundabouts located in the region of the city of Bialystok. The analysis was based on the results of road traffic and pedestrian monitoring where the geometry of intersections and traffic organization were taken into account. At signalized roundabouts, there are quite varied traffic load which amount to between 1800 and 6000 veh/hr at daytime. The participation of trucks is in the range between 2,8 and 6,5% and left turns are between 18 and 28% of the total traffic load at the intersection. As a part of detailed tests, calculations of capacity at two selected intersections were made with MOP-SZS-04 method. It was found out that the capacity was not exceeded and traffic conditions were good. A comparison of the capacity of signalized roundabout and the capacity of typical roundabout of similar geometry and the same traffic load was made. The results of the tests and analyses have confirmed that the analyzed type of intersection is a good solution in terms of the capacity and traffic conditions.

Highway in a city and its influence to the landscape. Case studies  of Wrocław and Piekary Śląskie (Poland)

In the article authors characterize new highways run through Wrocław and Piekary Śląskie and survey them in landscape and environmental dimensions. In many sections both road investments run in neighbourhood of urban areas with residential functions. As a result of field investigations problems and conflict areas are indicated. Authors analyzing adopted and proposed solutions in urban landscaping in highway neighbourhood. They are typical and represented by placed greenery, decorative bushes, line of tree seedlings. There are plans to introduce creepers on selected acoustic baffles for ‘revival’ and making ‘grey concrete landscape’ more dynamic. More exquisite landscape architecture has not been discovered around highways in Wrocław and Piekary Śląskie. A negative phenomenon is creation of so-called  ‘urban fallows’  areas excluded from usage due to cutting off by a run of roads run and under viaducts. In authors’ opinion placed (high) tree seedlings along acoustic baffles is not effective  since now for many years they will have a limited influence (if any) to landscape aesthetics, being also too small to covered grey, concrete walls.
Methods, which have been applied for preparation of the article, include mainly documents analysis and landscape observations. Results suggest that functionality are in main concern of highway constructors and other dimensions of landscape physiognomy, like for example aesthetics, are receded into the background.

Changes on Polish regional air market between 2008 and 2012

This paper describes the capabilities of the Polish market of regional air transport. The stress was put on the changes  brought about by a new carrier, and the reactions of competitors. The authors performed an analysis of current operating carriers, as well as now defunct carrier -OLT Express. The paper presents the risk posed by the introduction of dumping prices, and on the other hand the chances generated by the increase of the number of passengers. It was noted that the potential for domestic air route is enormous. The authors drew attention to the development of aviation infrastructure. Not without significance is also a systematic approach to air transport. Airport`s availability is currently being developed. The best in terms of time, cost and comfort is to connect airports and city centers via rail. These solutions have already been implemented in Krakow and Warsaw, and there are plans to create such connections also for other facilities.  The need for the regional competitiveness of air transport with other modes of transport was noted. For journeys over longer distances, where the travel time and comfort are important, and with the increasing price of fuel, the cost of flight becomes competitive to travel by car or train.

Infrastructure and appearance of Tramway Plus in Wrocław stops

The article is a second part of a study concerning stops served by Tramway Plus in Wrocław. In the first part the main topic was the functionality and accessibility of the stops, while the present paper investigates the appearance (landscape) created by the infrastructure prepared for passengers. Unfortunately, the appearance of the stops is quite diversified. The biggest differences can be distinguished between particular types of stops. Finally there are three types of stops which differ from one another. Newly built infrastructure is very futuristic, similar to the underground stations, with long platform roofs, big boards with stops names and electronic passenger information . Rebuilt stops are designed variously; some are modern, others more traditional or simply typical like regular tram lines. The third group – unmodernized stops – have twofold appearance. The project of the Tramway Plus could have created a new perception of the public transport in Wrocław. This could be gained by similar stylistics of all stops. Unfortunately, various inconsistencies as far as landscape is concern – which often are a result of seeming (false)  savings – lead us to the conclusion that project of Tramway Plus has not became a homogenous market product contributing with improvement of the Wrocław’s public transport image. In the article also the adjustments of the infrastructure for disabled people and the stops names are investigated.

Tariff and fare integration of the public transport in Łódź agglomeration

Local and regional authorities have instruments thanks which may support integration of urban transport. One can mention some of them: financing the public transport, establishing of the tariff and tickets in urban public transport, institutional solutions and infrastructure investment.
In the article, the problem of tariff and ticket integration has been described. Tariff and fare integration enables to buy one ticket which is valid for two or more carriers (organizers). Possibility to travel on the common ticket by various public transport means e.g.  regional bus, commuter rail, tram or metro is an additional benefit.. Thanks to that, passengers using public transport services do not have to take care about information on  the tariffs of various carriers, purchase or punch few tickets. Integration activities are to strengthen the meaning of public transport by improving the quality of services and to increase competitiveness in relation to individual transport. The author presents the functioning of integrated fares in four Polish cities – Kraków, Wrocław, Warszawa and Gdańsk Bay Metropolis.
Also the results of a survey conducted in Łódź agglomeration in order to implement an integrated ticket for that area have been presented. The study was carried out in late July and early August 2011. Passengers using public transport and railways were asked about daily travels on selected three routes, tickets they buy now and potential interest in a common ticket. 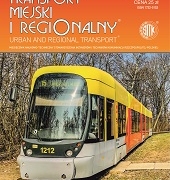