Sławomir Goliszek,  Marcin Połom – Vehicle policy of the trolleybus transport companies in the Czech Republic and Slovakia in the years 2004-2014

Sławomir Goliszek,  Marcin Połom
Vehicle policy of the trolleybus transport companies in the Czech Republic and Slovakia in the years 2004-2014

Abstract: Trolleybus transport in post-communist countries of the Eastern Europe plays a significant role. Among the EU countries this type of urban transport subsystem is mostly represented in countries such as the Czech Republic and Slovakia. There are not many  trolleybus’ producers so that  their role is particularly important.  One of the most recognized is Škoda in the Czech Republic. Two factors related to the trolleybus transport indicates  significant role of public transport in the Czech Republic and Slovakia. The location of the traditional trolleybus producer Skoda in Plzen affected the author to choose this subject matter to consider and to make analysis of the factors influencing the vehicle policies by eighteen trolleybus carriers of the region. The impact of political and economic changes on maintaining production of trolleybuses in the Czech Republic and limiting exports is considered to be worthwhile. Effective cooperation between Škoda, major producer of trolleybuses, with a competitive Solaris led to the monopolization of the market by Škoda. In the analyzed period 449 vehicles have been delivered to the Czech and Slovak trolleybus companies manufactured primarily by Skoda, but also Solaris and SOR in collaboration with the DP Ostrava (later EKOVA). The only city that has not carried a trolleybus fleet renewal policies –  is the Slovakian city  – Kosice. The highest percentage of replacement trolley bus vehicles with the new ones in the years 2004-2014 was recorded in Teplice, Jihlava, Marianske Lazne and Zlin, while the lowest percentage was noticed in Brno. The largest amount of trolleybuses have been delivered to Bratislava, Pilsen and Zlinu, and the smallest number of vehicles has been contracted to Chomutov.

Abstract: This article presents project of a multi-modal transshipment port in the Functional Urban Area of Zduńska Wola – Karsznice. In order to achieve synergy effects at the interface between road and rail infrastructure with appropriate parameters and logistics infrastructure is crucial to the development of a coherent scenario for the coherence of nodes specified systems. The study indicated the location of investments in the regional transport network of the Łódź region and against the background of international transport corridors. Stages of development of the logistics facility and the characteristics of the equipment responsible for the effective blending of road and rail transport are described. Functional urban areas with developed sphere of logistics are designed to provide multi-modal transport operators optimal business conditions favoring both spatial and economic development of urban centers, based on which areas are generated.

Abstract: The changes in bus transportation in Poland after 1989 have impacted most aspects associated with the functioning of this type of transportation in the socio-economic sphere of Poland. The changes have referred also to the infrastructure intended  for  check-in of passengers which number has been growing noticeably in recent years. This article is to present the transformation of the infrastructure and its current state, on the example of 7 selected cities of the Lower Silesian Voivodeship. The analysis is a case study presenting similarities and differences referring to this area that have occurred and still are typical in  discussed cities. Author is focused also  on: equipment of the main service points for travelers with elements improving their functionality and travelers’ comfort, location of this infrastructure within the city boundaries, as well as its connection with  other objects important  for passengers. Conducted studies  confirm the thesis of strong changes of the infrastructure devoted for  bus passengers’ check-in in selected cities of the Lower Silesian Voivodeship. A distinctive feature is diversification of these processes in different cities. The processes are dependent on local factors. The similarities include the tendency, occurring in many cities and towns, that in the given area there are several bus stops operating. Also degradation and transformation of  old bus terminals functioning in different socio-economic conditions – is observable. The abovementioned phenomena are generally consequences of the liberalisation and deregulation which has occurred in the bus transportation in Poland after 1989.

Abstract: As a result of the European integration a number of social and economic connections is rising between regions situated on both sides of national border. This causes an increase in demand for transport services. On the Polish-German border this gap is currently filled by private bus companies and private cars. Railways are performing the secondary role. While in Germany regional cross-border connections constitute an element of the regular regional railway system [3], in Poland they are a solution which cause  much controversy and discussion, and the number of connections is relatively low. Research on the preference of passengers of the railway line Berlin-Szczecin conducted in the spring 2014, on behalf of VBB, the organiser of the German  public transport in Berlin and Brandenburg, proves, that there is a potential for development. It is possible despite strong competition of bus carriers.

Intelligent passenger information system  for the public transport in Bydgoszcz

Abstract: Passenger information systems play an important role in traveling by means of urban and regional public transportation. The continuous development of digital technology enables to implement the newest techniques for managing messages of the traffic conditions for each public transport vehicle. This technology also allows to monitor transport work by dispatchers. Clearly  planned passenger information system also contributes with  raising attractiveness of this sector transport services. In this article, authors present characteristics of passenger information system in Bydgoszcz  before implementation of modern management measures and nowadays, after the implementation,  in the framework of Intelligent Transportation Systems project. All modules available for both: the organizer and operators of public transport system in Bydgoszcz are characterized. Then the whole procedure of data presentation on monitors with dynamics information at stops, technical capabilities of these monitors and process of interacting this segment with the traffic dispatcher software (displays on a digital map current position of public transport vehicles) is described in detail. 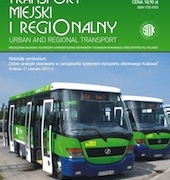