The paper presents results of two research projects, aiming to prioritise quality attributes of urban public transport. The first  project aims to compare the classic approach (i.e. direct assessment of the importance by passengers) with ordered logit model. The second one uses ordered and multinomial (based on stated choice experiments) logit models. Additionally, the traditional set of quality attributes has been redeveloped.
From the methodological point of view, ordered logit modelling is a method that enables easy diagnosis of strengths and weaknesses of a transport system, often basing on an already collected dataset. Multinomial logit modelling requires more complicated data collection, but provides more complex data on customers’ choices and enables valuation of quality attributes. This method offers also effective assessment of a given operator or vehicle’s type.
The conducted research shows, that the change of research method increases the importance of low price and short journey time, as well as such comfort attributes, as cleanless, thermal comfort, quality of drivers’ work and vehicles’ equipment, which haven’t been considered as independent quality attributes yet.

General conditions of speed choice in the free traffic by drivers during adverse road’s illumi-nation conditions by night have been presented in the article. The hypothesis has been formulated: degradation of the conditions of road sight perception by night does not have to automatically cause a speed reduction if simultaneously other condi-tions – determining subjective estimation of threat  to traffic safety – are improved.To support this hypothesis selected results of other authors’ research works as well as results of author’s studies and speed analysis have been presented. Selected outcomes of comprehen-sive researches of different geometrical and functional characteristics,  made in 3 groups: on the passages of roads outside the city, on the road crossings in spots and on the roads’ sections have been presented.Variations’ profiles of average speed calculated in successive hours during the day and night have been analyzed. It was proved that profiles differ from each other depending on road’s location and a season. When analyzing road’s crossings in spots and street’s sections tendency to rise a speed in the free traffic in the periods of decreasing activity in the road/street’s surroundings was stated. This speed’s rise has occurred although road/street’s illumination conditions were getting worse.

Study of passenger transportation by rope in Gdańsk

This paper presents the results of a concept project for an overhead ropeway on the Gradowa Mount (Góra Gradowa) in Gdańsk. On the top of the mount there is the Grodzisko Fort, which has a chance to become one of the most important points on the tourist map of Gdańsk. At the Fort itself as well as in its vicinity, large-scale projects aimed at development of the city are being implemented. For example, the Hewelianum project is being implemented there, which, in addition to promoting the knowledge about the military and defensive architecture of Gdańsk, is one of the responsibilities of the “Gdańsk Fortress” Culture Park of City Fortifications (PKFM). Within a very short distance from the Fort, the so-called Young City is to be created, on the border of which the modern European Solidarity Centre is being erected. It should be noted that the area of the Fort generates continuously growing interest from tourists as well as the inhabitants of Gdańsk. One of the major problems is quite poor transportation link between the centre of Gdańsk and the mount where the Grodzisko Fort is situated.
As a solution for this problem the authors propose construction of a ropeway. The ropeway, except for transporting passengers from the area of the Old Town, would be also a tourist attraction and provide a great panoramic view of Gdańsk.
The article presents the local conditions regarding the construction of such a ropeway, the proposed technology, and selected results of calculations, as well as the problems associated with the different variants of the ropeway route. The attention was also paid to the important issue of ropeway evacuation system.

The paper contains an overview of the main idea and content of the leading presentations given at the Third Congress of Active Mobility – a flagship project of the Polish Union of Active Mobility (PUMA) association held in Gdańsk on 6th -7th September 2012.  The congress, which has been the third event of this kind, promoted the stipulations of the Gdańsk Charter of Active Mobility assuming the integration of spatial and transport policies to create compact cities where walking and cycling could be preferred in the process of shaping public space and their connections with public transport. It is closely connected with preparing Polish local governments to effective use of the EU funding, exploiting best practices resulting from system approach to cycling tested in Germany. The paper exposes the need to explain the benefits from extension of residential zones and traffic calmed areas. There is also an invitation to the Velo-City 2013 conference in Vienna in June 2013 and the fourth edition of the Polish Active Mobility Congress in September  2013.

The restructuring of public transport in Poland. From monopoly to…monopoly?

Restructuring of public transport in Poland allows to summarize its results. Local authorities, seeking to improve the efficiency and quality of public transport have taken different actions in the choice of form and shape range of the public transport market.
By setting up budgetary establishments in the early 90-ies of XX century, transformation of the public transport companies was an example of forcing organizational solutions by irrational law from long-term business functioning point of view. Similar effects took place in the following years.
While the choice of organizational forms of public transport companies was often determined by the law, the attitude of local authorities toward deregulations often was under the influence of external factors, for example the impact of public transport unions as well as political conditions, excluding the rights following the theory of economics  As a result, many cities in Poland has not achieved the outcoming effects of the restucturization process, which would have been possible if it was not for lack of determination and consistency in the transformation of public transport market.
The article presents the restructurization processes from elimination of monopoly to regulated competition. Conditions in which  terms of the current legislation could lead to the re-monopolization have been evaluated.

Punctuality of urban public transport in Cracow since 1997 to 2011

The article presents an analysis of punctuality of vehicles operating in the urban public transport in Cracow. Analysis includes service of trams as well as buses.
The basis for the analysis is the data collected during observations at the bus’ and tram’s stops since 1997 till today. Only missing data refers to the year of 2006. Since 1997 to 2005 observations had been organized within the SKUT system (System of Statistic Supervision on Transport Service) and then observations were run by managing company of public transport, nowadays it is the ZIKiT (Company for Municipal Infrastructure and Transport).
In the first part of the article the matter of transport researches implemented in the SKUT system as well as by the ZIKiT has been described. This issue has been presented comprehensively since, as it will be presented in the further analysis of punctuality, change of the observation’s method resulted in significant change of indicator’s value. Then, two-part analysis of punctuality is presented where variability of indicators and shaping of average deviations of punctuality “d” have been described. The values of punctuality’s indicators were set for absolute punctuality (d = 0) and taking into consideration tolerance’s interval assumed as <-2, 1>. Average punctuality’ deviations have been calculated for all observed public transport vehicles and later on only for delayed courses. Calculations of indicators and average deviations were made for the period of a year. Besides calculations for all vehicles together, indicators for buses and trams separately as well as for week and weekend’s days have also been made. To complete above analysis data concerning changes of number of trams’ and buses’ courses included in the observations has been presented.
Publication indicates that selection of data collection used to calculate punctuality’ indicators and specially an observation’s method influence the results. Especially important seems to be organizing an observation without informing the carrier. 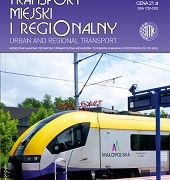