Tomasz Szczuraszek, Marcin Karwasz –Analysis of selected characteristics of paid parking zone in relation to implementation of the ITS in Bydgoszcz city centre

Flow allocation to lanes in lane groups at signalized intersections

Abstract: Information about traffic volume for movements on lanes plays important role in analysis of traffic performance. However observations that allow to allocate flows for movements to individual lanes are employed rarely.  The Polish Manual for Capacity Analyses at Signalized Intersections contains a specific procedure which allows the distribution of traffic movements in particular lanes to be determined. The idea of the flow allocation to lanes (FAL) is based on the assumption that drivers tend to select lane offering better performance which leads to equilibrium conditions for all shared lanes. The FAL procedure equilibrium conditions are represented by equalization of degree of saturation for all individual lanes. The research conducted at several signalized intersection approaches in urban areas and a few dozen of rural approaches allowed the estimation error of the calculation method to be determined. The results enabled the comparison of empirical distribution of the traffic volume to lanes and values obtained from theoretical analysis. In most cases the differences are lower than 10 %. However, for some intersection’s approaches the relative error is greater and in some cases it may even exceed 20 %. Rather than disqualifying the FAL procedure, such results indicate that beside traffic performance on particular lanes (represented by length of queue and lane operation) another factors influencing the lane selection should be considered. The share of heavy vehicle volume on individual lanes and its influence on the calculated traffic volume has been thoroughly discussed. It has been shown that application of vehicle type distribution determined individually for each lane in calculation procedure significantly improves the accuracy of traffic volume estimation for particular lanes. Correlations which allow the share of heavy vehicles on individual lanes in lane groups to be determined are included.

Abstract: In the years 2012 – 2015 in Bydgoszcz the project involving the preparation and implementation of Intelligent Transport Systems (ITS) is being realized. Bydgoszcz project will include activities in four areas (segments): traffic control, public transport management with stops dynamic information, parking information, guidance vehicles on alternative road. Subsystem in the area of parking management is to contribute to the improvement of traffic conditions on the road network located in the paid parking zone in the central part of the city, better use of parking space and improving access to parking spaces. Accordingly the implementation of ITS project, studies of parking characteristics in paid parking zone have been conducted. This data is necessary to construct a parking information system, whose main task is to transfer information via electronic sign boards about available parking spaces. The aim of this article is to identify problems related to the correct identification of number of vehicles parked in the area covered with the implementation of the ITS subsystem . Dynamic information about number of vehicles parking in particular streets of parking zone is the basic condition enabling to inform drivers about the of occupancy of parking spaces.

Abstract: Cycling tourism is one of the most popular forms of outdoor recreation, however a substantial limitation to its development are restrictions in transporting bicycles in means of public transport. In order to improve the situation various lines in the Czech Republic are operated by buses adapted to bicycle transporting. So called cyclobuses connect sources of tourist traffic (bigger cities, tourist centres) with higher mountain ranges and tourist attractions. Nowadays they operate on tens of routes in several regions, some of which are presented in the paper. The main aim of the article is to analyse this specific offer – course and connections between routes, timetables, rules of bicycle transporting and forms of promotion – in order to propose some model organisational solutions, possible to introduce in other countries, also in Poland. One of the oldest and most developed networks of cyclobuses – in the region of Orlické Mountains – was more precisely examined. The shape of the network in selected years was analysed using coefficients originating from the graph theory, also changing number of services was inspected. As far as other cases (Karkonosze Mountains, Czech Paradise, Karlovy Vary region) only present situation was presented. According to conducted studies the system of cyclobuses is an important part of the Czech public transport and makes accessible the most attractive areas.

Abstract: The article discusses issues of traffic control systems which implementation in the urban areas enables to rise effectiveness of public transport operation. The researches aimed to analyze traffic control system impact on smoothness of trams’ flow in the section from the Lipińskiego street to the Czerwone Maki terminus. In this specific tram lane it was assumed that public transport vehicles are to be given  priority in the traffic. During observations occurrences connected to the tram traffic and intersections were noted together with – among others – the cause of vehicles stoppages. In the article general results of for specific measures periods have been presented. Gained date enabled possibility to calculate number of stoppages caused by incorrect operation of the system. Basing on collected information also number of trams operating on this line with defined number of stoppages has been determined. Besides a question of the impact of number of stoppages on travel time on the analyzed section have been discussed. Also cost of the electric energy use caused by trams’ stoppages before signal lights with the reference to the type of vehicles operating on this lane has been calculated. Conducted analysis result with conclusion that number of stoppages and its average duration (time) significantly diverges from assumptions accepted during system implementation at this line. It means that system needs to be re-elaborated aimed at mineralization of number and duration of  tram stoppages. Conducted researches also conclude with necessity to monitor parameters  of traffic control systems aimed at optimization of its effectiveness. 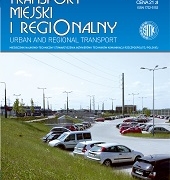 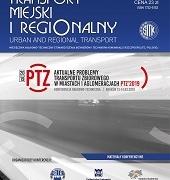