Michał Wójtowicz – Pictogram as an information carrier in the public transport

Pictogram as an information carrier in the public transport

Abstract: The goal of the article is to prove that the pictogram is not only a picture that provides simple information and to draw an attention to the complexity of problems associated with its location in the reality that surrounds us. The history of this type of information is presented in the historical approach – as the information given in the simplest possible way which is not limited by the language or nationality context. The evolution of pictorial information was presented on the example of images of hazardous chemicals. The need to maintain consistency in the transmission of information between the object and external environment has been demonstrated. In addition, an example of one simple pictogram and a multitude of variations presenting the same content are described. Solutions used in public transport – both domestic and European – have also presented. The legal basis for the use of specific markings and specific solutions applied in public transport practice have been presented. The last part of the article indicates the desired development directions for the picture passenger information. Important concepts such as noise data and visual noise have been discussed. Postulates regarding the minimization of transmitted information and its standardization on a macro scale were defined.

Abstract: The article aims to present the implementation mechanisms of the ITS system in Bielsko-Biała, in the framework of the project implemented in 2017-2018. The city carried out the first stage of key activities, using telematics – to automate tasks related to the operation of transport systems, in particular in the field of public transport. The scope of application of Intelligent Transport Systems to improve traffic flow and increase efficiency of public transport as well as logical architecture of the system and functions of the system have been presented. In addition, characteristics of the Public Transport Management Subsystem, technologies enabling its operation, as well as the process of implementing the priority function for public transport vehicles and solutions in the area of ​​passenger information have been discussed.

Abstract: From the passengers’ point of view, punctuality is one of the most important quality features. In air transport, the performance of operations by planes and their ground handling are much more time-consuming, and also heavily dependent on weather conditions. The purpose of the article is to conduct punctuality analysis, determine the structure and size of punctuality deviations as well as delays and accelerations of passenger flights performed at the John Paul II International Airport Krakow-Balice. The article presents not only basic information about the International Airport in Balice but its history and volume of air traffic in recent years as well. The most common causes of delays and delay codes developed by the International Air Transport Association have been discussed. Measures and indicators of punctuality have been defined. The structure of punctuality deviations and the assessment of statistical location measurements and variability of deviations from punctuality, accelerations and delays of flights for a period of 12 months have been presented. Flight punctuality analysis has been conducted in division to national and international flights in this period and for two selected months of the year breakdown by days. The summary presents the final conclusions of the punctuality analysis of passenger aircrafts and describes the most common causes of delays occurring at the John Paul II International Airport Kraków-Balice along with the way to eliminate them.

Abstract: The article presents in detail solutions of municipal public transport management in Poland during the All Saints’ Days. Data from the “cemetery operation” in 2015 for Bydgoszcz, Gdańsk, Kraków, Lublin, Łódź, Poznań, Rzeszów, Toruń, Warsaw and Wrocław have been presented. Special lines launched to handle increased passenger traffic to and from cemeteries, developments on regular lines, tariff and rolling stock changes, schedules and route modifications, as well as a number of specific solutions applied in selected cities have been discussed. A synthetic combination of so-called good practices that will help organizers of urban transport in Poland to improve quality of services offered during these specific days for public transport. 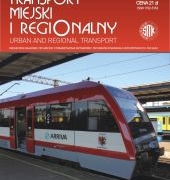