Sabina Mateja, Joanna Wachnicka – Traffic safety threats on intersections with the tram line located next to the road and improvement measures

Abstract: The article presents the analysis of traffic conflicts and questionnaire surveys as a tool to improve safety on street intersections with a tram line located next to the road. Its main purpose was to distinguish the role of conflict research and users opinions on those intersections in order to identify occurred problems. Approximated problems resulting from location the track infrastructure on one side of the road have been presented. The analysis conflict of wheeled vehicles and pedestrians traffic with tram traffic and presentation of the most common causes of conflict situations  have been shown. Problems affecting the occurrence of conflicts were identified The geometry of the road system, the organization of traffic and behaviors of road users was taken in account. Also examples research of conflicts which were carried out on intersections with a tram line located next to the road have been listed. Attention was turned to research aimed at road users who can express opinions on the use of road infrastructure. The last part presented examples of solutions for identified problems aimed at improving traffic conditions on such intersections.

Abstract: The review of data on the use of energy and energy consumption in public transport has been used to explore the relationship between its various optimization fields and transport energetics. The similarity of the energy effect with the normative modal split and the separation of the functionality of the transport work between the components of the public transport system was pointed out. The influence of street traffic organization (traffic speed) and activities rationalizing timetables have also been illustrated. Particular attention was paid to tram transport where there are significant differences in the operational energy use (depending on the kinetics in the scheduled traffic) and service (complementary to the final energy consumption). Innovations in drives have been addressed, paying attention to the increase in the operational energy consumption in a modern tram fleet and the potential of electric buses.The summary points to the need for energy management based on monitoring of annual demand, the study of operational consumption, control of final consumption, which would enable planning interventions in the transport system, broader exchange of experiences and dissemination of best practices. It is postulated in the process of application of various activities to use the analysis of energy benefits independently from conventional analyzes of costs and economic benefits. The criterion of energy intensity is considered to be the leading in the development of sustainable mobility.

Abstract: The public transport system is one of the key factors determining the economic and social development of modern cities, faced with the goal of providing convenient connections between different areas of the functional structure, i.e. ensuring high comfort and short travel time, while minimizing environmental impact. However, it is worth asking: is creating such a transport system possible, does it exclude certain social groups, and is it capable of satisfying the needs of all users? More and more modern planners and transportation engineers are facing this dilemma. According to many scientific publications, universal design is the answer, hence shaping public spaces and the transport systems with awareness of the diversity of the human collectivity in terms of sex, age, physical ability and health condition. Elderly people above 60 years of age and the disabled, who have various types of mental, physical and sensory dysfunctions, are at the greatest risk of social exclusion. These groups of people encounter many architectural and transportation barriers in their daily lives that make it impossible for them to move freely, thus limiting their access to education, employment and culture. This article defines the concepts of elderly and disabled people and presents the barriers most frequently encountered in city transport systems. The results of the survey studies conducted in Oświęcim and Kraków concerning assessment of public transport and its adaptation to elderly and disabled people are a significant part of this article. Results and conclusions obtained from studies can be an inspiration for other cities that want to create a transport system adapted to the needs of the analyzed group.

Abstract: Collective transport in cities and communes is an indispensable element of their functioning. Local  governments should constantly strive to continuously improve the quality of public transport, so that efficient, comfortable and reliable collective transport would be an attractive alternative to individual transport.The article presents the subject of safety in tram transport on the example of the Municipal Transport Company. in Kraków (MPK S.A.).  Safety of carried passengers is one of the priorities of the Kraków public transport operator operations. Values ​​of several safety indicators in the years 2016-2018 are presented in the article. Particular attention has been paid to the possibility of tram drivers impact on dangerous events. MPK S.A. in Kraków, through numerous social campaigns focused on the accidents prevention, as well as continuous exchange of rolling stock for more modern vehicles,  strives to properly care for the safety of employees as well as the passengers of Kraków’s public transport. 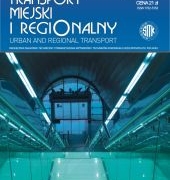