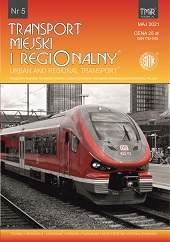 Abstract: The article presents an analysis of the effectiveness of various channels of ticket distribution from the offer of the Metropolitan Transport Authority (ZTM), which is the organizer of public transport in the GZM area (Metropolitan Association of Upper Silesia and Dąbrowa Basin area). In the first part, the ticket sales network issued by ZTM is characterized. Then it is compared with the sales network of the biggest public transport organizers in Poland. The next part analyses the share of particular ticket types and distribution channels in the overall sales structure of ZTM. The article ends with an analysis of changes in passengers’ ticket purchasing behavior due to the ongoing epidemic in Poland and related sanitary and epidemiological restrictions.

Abstract: The aim of this study is to analyze the extent of the problem of prohibited behaviors of motor vehicles drivers on the dedicated bus lanes. As part of the research subject, pilot measurements of road traffic intensity in cross-sections of streets with bus lanes in Poznań have been carried out. Four locations in the city were selected for the experiment, in which the results were recorded during the morning and afternoon peak hours. The results of this study may provide a basis for the traffic management authority in the implementation of solutions to reduce conditions for drivers to their prohibited behavior.

Abstract: The growing problem of urban sprawl, affecting mainly large cities, is becoming more and more noticeable not only in Poland but also globally. This process is a major cause of traffic congestion, i.e. urban crowding, and thus causes more and more difficulties for its users. Urban sprawl makes living in the city and moving around in it burdensome, driving even more to escape from the city, which in turn causes further urban sprawl processes. The article presents measures of balancing urban transport. They are categorized as disincentives – resulting in abandoning the use of passenger cars and ways to improve the use of public transport. Response methods in the area of ​​urban transport in Wrocław have been analyzed, and in some cases compared with actions taken in other cities.